Klassen and Klassen have a celebration signing day 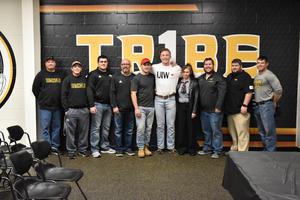 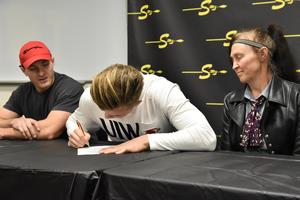 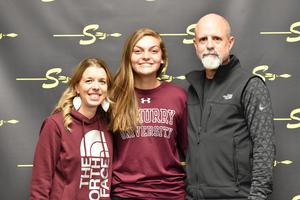 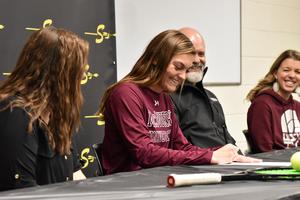 Seniors, Jasmin Klassen and Martin Klassen sign their letters of intent to play for tennis at McMurry University and football at the University of the Incarnate Word.
Seminole High School celebrated two student-athletes who celebrated their commitments to play their respective sports at their chosen university.
Jasmin Klassen will play tennis at McMurry University. Martin Klassen has committed to play football at the University of the Incarnate Word.
"We want to celebrate Jasmin and her great accomplishment of continuing her education and her athletic ability," stated Tri Danley, Girls Athletic Director. "So congratulations to Jasmin, and her family -- this is a great honor."
Head Tennis Coach, Kevin Gersbach, reminisced his tenure with Jasmin, who began coaching her in the seventh grade.
"It's quite amazing to be here, because I can remember this seventh grade girl standing there on the tennis court telling me, 'I am only doing this until I get to high school to play softball.'" "She has definitely exceeded my expectations, and even more. I've never had a player that everywhere she went, people surrounded her court. She is truly amazing and will continue to do great things."
Both students spoke to their peers and thanked God, their family, coaches, and friends who continue to encourage them on this journey.
"I am excited about this opportunity to play for McMurry," stated Jasmin. "I look forward to see how I continue to grow and learn from the coaches and team."
Martin, a first-generation college student, looks forward to the transition and what the future has in store for him.
"I'm excited because I am the only one in my family to go to college," stated Martin." "For me to leave Seminole and go to San Antonio to play football -- it is a really big deal. I'm humbled by this opportunity."
Seminole Indian Head Football Coach, Ty Palmer, praised Martin for his natural athletic ability and the amount of potential he has.
"The fact that he has played one year of football and is able to sign with a Division 1 school is a testament to his work ethic and ability," stated Palmer. "Martin is the steal of the class for anyone. The sky is the limit for him and his potential as he grows and continues to develop. I am so excited to watch him mature and become a great player for IWU. I am also very excited to watch him mature and continue to grow into a great person and get his college degree."
Students and staff alike attended the signing celebration for Jasmin and Martin in the SHS Athletic Team room, where there was standing room only. "This room of people gathered together to celebrate other's accomplishments, is a testament to the TR1BE mentality we have here in Seminole, stated David Williams, Boys Athletic Director. "Everybody is behind everybody -- and wants to see the best for everybody."